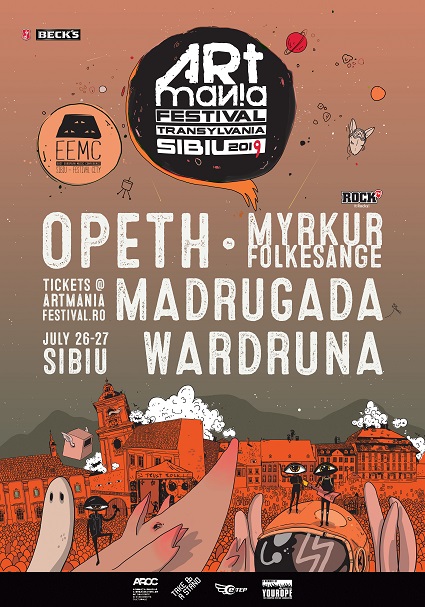 2 years ago8 months ago

Opeth, Madrugada, Wardruna and Myrkur are the first artists confirmed for the 14th edition of ARTmania Festival, that will take place in July 26-27, 2019, in the Large Square of the medieval citadel of Sibiu.

Opeth, one of the best-known names in the international music industry returns to the ARTmania Festival scene 10 years from their first performance in Romania and on the Large Square stage.  The Swedish band that redefined a whole genre, demolished musical conventions and never stopped surprising its fans, has been founded in one of the Stockholm suburbs by Mikael Åkerfeldt in 1990. With 12 albums released so far, intense, varied and stylistically rich, Opeth is one of the best musical projects in the world, whether we are considering its live shows or its albums. Over the course of its career, the band has had a stylistically diverse and interesting musical route: with “Orchid” (1995) it redefined the death metal borders. Six years later, with “Blackwater Park”, it reached the summit of musicality for such a genre, while with “Damnation” (2003) broke all known norms. Five years afterwards, “Watershed” marked the ending of the death metal chapter after visiting and capturing the darkest corners and most brutal nuances of it. In 2014, “Pale Communion” represented the official crossing towards the progressive genre, marked by a novel, contemporary, interpretation and entwinement of 60s, 70s, 80s specific sounds. Proof of their musical success are not just positive reviews from critics, but also a Swedish Grammy for “Best Hard Rock Show” as well as their presence in many international tops, like Billboard 200. Opeth is one name that will not be forgotten, but will constantly reinvent itself to be better.

The Norwegians from Madrugada are the main actors of a double premiere: for the first time in Romania and reunited for the first time in ten years, the band choosing ARTmania Festival as part of their comeback tour. This European tour de force marks ten years from the launch of their legendary debut album “Industrial Silence”, reason why three of the original four artists will go onstage: Sivert Høyem, Frode Jacobsen and Jon Lauvland Pettersen. Madrugada, which means blue hour in Portuguese and Spanish (the gray-blue period that precedes sunrise) was formed in 1993 in the Norwegian town of Stokmarknes. The name came as a suggestion to the band from one of their friends, a poet that was also a lyricist for their songs. In over 13 years of existence, the band released six albums, some of them being best sellers in Norway, and brought them five Spellemannprisen Awards, the Norwegian equivalent of the Grammys (for Best rock album, Best Song, Best Spellemann of the Year), two Alarm Awards and numerous trophies for album sales.

Wardruna, familiar to the Romanian public thanks to the Vikings series, is a Norwegian neo/dark folk band that explores the depths and mysticism of Nordic traditional culture, reinterpreted in a contemporary style, with strong mysterious accents. Established in 2003 by Einar Kvitrafn Selvik, the band impressed fans of neofolk with their hypnotic debut album, „gap var Ginnunga”, first of the “Runaljod” trilogy, which lies under the sign of the 24 runes.  Each of the recordings included on all three albums was done in the outdoors, in places or circumstances relevant for each of the 24 runes. In the period following the release of their first album, the band focused on adapting their songs to the demands of playing them live. The effort was rewarded by the success of a series of shows, the crown jewel being the live show at the Norwegian Viking Ship Museum, in front of the “Gokstad”, a 1,100-year-old ship.

The second album of the trilogy, “Yggdrasil” was brought to life with the help of the oldest traditional Norse instruments and antique poetic rhythms, accentuated by lyrics written in old Norwegian or in dialects preceding this language. Old sounds borne from these traditional instruments are completed by the voices’ musicality, the whispers or incantations and of sounds from other sources like: the sounds of the trees, the rocks, water of burning torches. The last album of the trilogy “Runaljod – Ragnarok” was released towards the end of 2016 in order to lead the listener further, in the initiatory journey launched when the band was formed.

At the 14th edition of ARTmania Festival, Wardruna will entertain its fanes with songs from their last album, “Skald” which will be released at the end of November 2018. “Skald” promises its listeners a lot of surprises, carrying them in a new musical adventure outside the rich sound landscape which made Warduna famous. The new approach, direct, but as intense, will submerge the travelers in a mystical conjunction of poetry, voice, antique sounds of traditional instruments.

Myrkur: „Folkesange” – the artist returns to Romania with a special concert that is part of the acoustic tour (named Folkesange). During this tour, alongside a group of young players and a female choir, the artist will sing songs from the Norse folklore and own reinterpreted compositions in an acoustic version, both song types being included in her latest album, “Mareridt”.

Myrkur, translated as darkness in Icelandic, is the blak metal project and alter ego of Danish artist and model Amalie Bruun. Born out of Scandinavian darness, Myrkur combines the brutal intensity of masculine energy with black metal sounds and musicality of feminine voices, sometimes sophisticated and delicate.

Her debut album, M (a co-production with members from Mayhem, Nidingr and Arch Enemy), has brought Amalia Bruun the award for best Hard Rock Album at the Gaffa Awards in 2015, the award for Band of the Year and Metal Album of the Year at High Voltage Awards. She was intensely praised, had tours along well-known artists like Behemoth or Opeth and played at festivals llike Hellfest, Graspop and Wacken Open Air Festival.

Her second album, Mareridt (nightmare in Danish) is an intense juxtaposition between darkness and light, translated in tones, rhythms and intense sounds, which have brought her the Album of the Year Award of the Golden Gods Ceremony, organized by Metal Hammer.

Passes for the 2019 edition of ARTmania Festival are already available on the official website, www.artmaniafestival.ro, the first 1,000 passes having the special price of 190lei each, available until 30 November 2018 the latest.