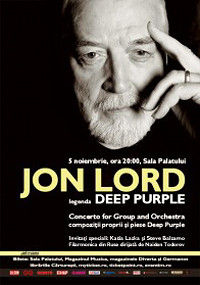 The show will present for the first time in Romania: Concerto for Group and Orchestra, Pictures of Home or Child in Time from Jon`s Deep Purple Discography and many other tracks selected from more than 15 Solo albums composed by Jon Lord.

Jon Lord is an english composer and piano player well known for playing the Hammond organ. Lord is recognized for his pioneering work in fusing rock and classical genres. He has most famously been a member of Deep Purple, as well as of Whitesnake, Paice, Ashton & Lord, and many others. In Bucharest Jon Lord is playing with Steve Balsamo, Katia Laska and Bulgarian State Philharmonic Ruse conducted by Nayden Todorov.

One of his finest works was his composition Concerto for Group and Orchestra, which was performed at the Royal Albert Hall in 1969 with Deep Purple (Lord and Paice with guitarist Ritchie Blackmore, singer Ian Gillan and bassist Roger Glover) and the Royal Philharmonic Orchestra. The concerto was revived for its 30th anniversary in 1999 with another performance at the Albert Hall, again performed by Deep Purple (Lord, Paice, Gillan, Glover and Steve Morse in place of Ritchie Blackmore) with the London Philharmonic Orchestra conducted by Paul Mann. The concerts were soldout and the recorded DVD’s reached 500.000 sold copies. They tour in Europe, South America and Japan for 40 concerts with “Orchestra Filarmonicii George Enescu” in Europe and “New Japan Philharmonic Orchestra” in Japan.

In 2002 he retired from Deep Purple for good, to concentrate on composing and on lower-key blues/rock performances. In 2008, he achieved success as a classical composer when his Durham Concerto entered the classical album charts. This year on September 1st, Jon Lord performed in the Plovdiv Ancient Roman Theatre in front of 4.000 people.

Jon Lord is playing in Bucharest with Katia Laska and Steve Balsamo. Katia Laska was born in Poland. She  took classical piano lessons and  never stopped singing, so after many years of being told to hush, she gave up the piano and decided to become a singer instead. When she was 16, Katia moved to Warsaw and made her first professional appearance in the musical “Joseph and the Amazing Technicolor Dream Coat”. She went on to perform in the musicals “Fame”, “The Wizard of Oz”, “Peter Pan”, “Grease” and “Chicago” and she played Maria in “ West Side Story”. Steve Balsamo is a British singer and songwriter, famous for his lead role on the London version of Jesus Christ Superstar during the mid-90s. But Steve Balsamo got back to his first love, writing and playing his own tracks. In 2002 he released his debut album ‘All I Am’ which reached the top 40 in the UK. In 2004, Steve formed ‘The Storys’, a West Coast influenced harmony country-rock band. Their highly acclaimed debut album came to the attention of Elton John who after publicly declaring it was ’Fantastic!’, personally called Steve and invited the band to tour Europe with him – twice! The band has also toured and played with the likes of Joe Cocker, Katie Melua, Celine Dion, Santana, Tom Jones to name-drop but a few. Aside from his work with the band, Steve is a prolific songwriter, having scored hits in Europe and Australia, with artists as diverse as Meatloaf, Anthony Callea, Jonathon Cerrada and Slash of Guns N’ Roses fame.

Jon Lord will perform with the “Bulgarian State Philharmonic Ruse”. Founded in 1948, the Philarmonic had been conducted by renowned talents from Bulgaria and abroad: Kurt Masur, Carlo Zecchi, Valery Gergiev si Evgeny Svetlanov. They intiated in 1961 the first international classical music festival in Bulgaria and recored many Cd’s. Lately, they recorded with Classico, a label from Denmark, a new series of audio works. Bulgarian State Philarmonic Ruse will be conducted by the well know master Nayden Todorov.

Naiden Todorov stuided with  Karl Osterreicher si Uros Lajovic in Viena and conducted the most important orchestras from Europa. He was the resident conductor for “Israel Northern Symphony” from Haifa.

Jon Lord accepted our invitation to present in front of the Romanian public a contemporary masterpiece acclaimed worldwide with particular mixture of musical genres that made him famous. He wrote on his website to the fans: ‘By the way – I have NOT retired!’