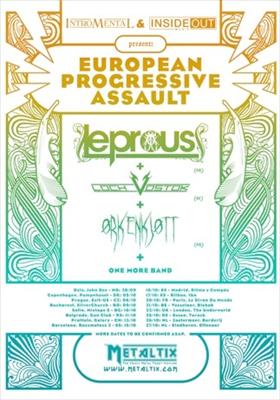 8 years ago5 months ago

The Norwegian band Leprous returns to Romania at the Silver Church on October 9th 2012. After being main support act for Amorphis in their 2011 Bucharest concert, this year Leprous embarks in a tour around Europe.” European Progressive Assault” will bring together on the same stage Leprous (NO), Loch Vostok (SE), Ørkenkjøtt (NO), and another name soon to be announced.

Loch Vostok joins the Norwegians, but it is not for the first time the bands are playing together: in 2010, the bands accompanied Therion in their promotional tour. The Swedes began in February 2012 the production of their fifth album “The Doctrine Decoded”, material to be released this summer.

Ørkenkjøtt has been playing experimental extreme metal since 2005. Inferno Metal Festival said about them: What’s up with these non-blackmetal Norwegians? If you like Enslaved, Opeth, Tool, you will probably love Ørkenkjøtt. Telemark, the Norwegians’ hometown, has become legendary for its black metal scene, thanks to important bands like Emperor, Mortiis, Zyklon. Ørkenkjøtt are determined to continue the tradition by combining extreme metal with jazz elements, acoustic and rock music, successfully innovating the experimental metal aria.

Apart from the tour scheduled for this year, Leprous will also play at some important European festivals, mentioning just Fused Festival (UK) and Graspop Metal Meeting (BE).

Tickets can be purchased online, at shop.artmania.ro, myticket.ro, eventim.ro or in Diverta and Eventim Networks for 60 in advance and 70 lei on concert day. An ARTmania Event.