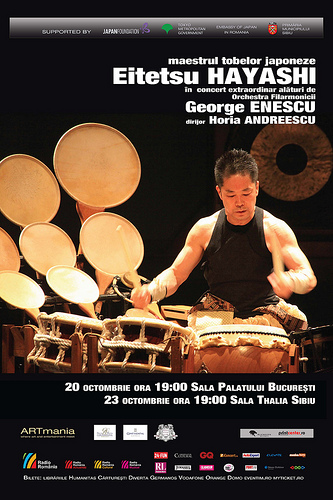 The best traditional Japanese drum percussioner will be coming to Romania to play in a series of concerts alongside the “George Enescu” Philharmonic Orchestra, conducted by Horia Andreescu: 20th October, 19:00, Palace Hall Bucharest and 23th October, 19:00, Thalia Hall, Sibiu.

The concerts will start with a series of works signed by local composers: Bela Bartok, George Enescu, Ciprian Porumbescu, Doru Popovici, Tiberiu Olah and Grigoras Dinicu. The second part of the concert will feature the Hi-Ten-Yu – A Concerto for Japanese drum and orchestra, composed by Isao Matshushita.

The wa-daiko, a traditional Japanese percussion instrument common to the special ceremonies of Japanese festivals, often imitates the unification of heaven and earth. The powerful sound of this festival drum travels all the way to heaven, quickly transforming to free and delicate sound, and resonates back as a deep howl from the earth’s abyss. The title of this composition, comprised of three Chinese characters Hi-Ten-Yu (Fly – Heaven – Play), symbolically suggests “flying to heaven to play among the stars.”  Like the title, this composition is divided into three parts. The entire piece centers around free movements of a wa-daiko and develops from tranquility to vigorous activity. While the wa-daiko’s keen and instinctive power represents one world, another world consists of demands on the orchestra to logically construct the piece. In all parts of this composition, I attempted to unify these two worlds. Isao Matshushita