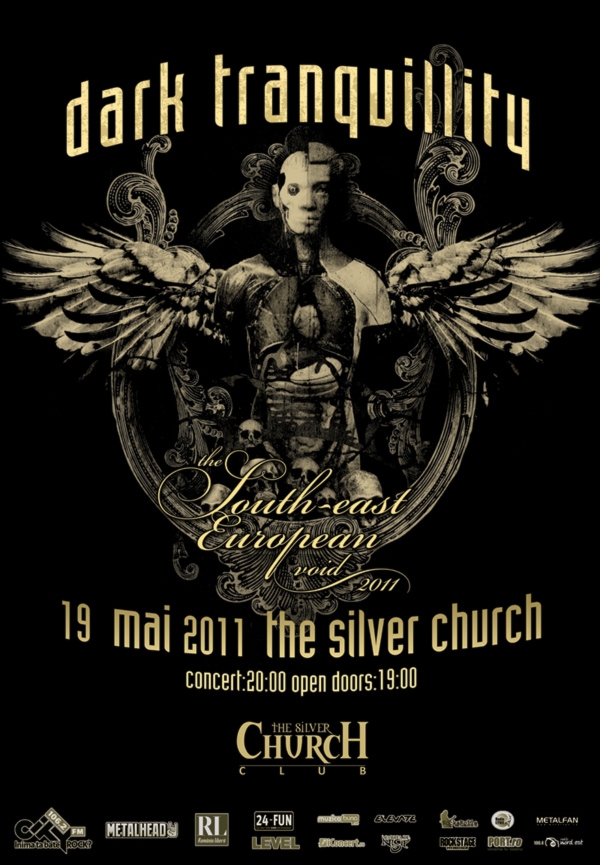 Thursday, 19th of May, Silver Church club opens up to properly accommodate Dark Tranquillity. The band returns to Romania just a year after their extraordinary concert in Sibiu, at ARTmania Festival 2010. With 14 albums released so far, the pioneers of Gothenburg metal offer an intense experience, filled with influences of their Scandinavian roots.

The Swedish have an elevated music, of a very personal style, refined by 20 years of career. In 1989, Mikael Stanne (guitar and vocals) and Niklas Sundin (guitar) start Septic Boiler. Shortly afterwards they are joined by Anders Fridén, Andert Jivarp and Martin Henriksson, and in 1999, after recording their first demo the band changes its name to Dark Tranquillity.
Bands like In Flames and Dark Tranquillity are the pioneers of a special music style that mixes the melody of the new wave British metal with the intensity of death metal, giving birth to Gothenburg metal. With time, other bands were included in the same category, even if they were not original from the town of Gothenburg: Insomnium, Arch Enemy or Eternal Tears of Sorrow.

“Skydancer” is the name of the first album, recorded in 1993, with vocals by now lead singer of In Flames, Anders Fridén and acoustic guitars and feminine voices done by their school colleagues. “The Gallery” is considered a classic album of Gothenburg metal, according to a top by Decibel magazine. “Projector”, Dark Tranquillity’s fourth album received a nomination to Swedish Grammy Awards and marked a change in the band’s style: 1999 was the year Dark Tranquillity added more nuances to their vocals as well as pianos and violins to their rough style.
“Damage Done” goes back to the original sound, while “Character” (2002) and “Fiction” (2007) are the last albums the band recorded with bass player Michael Nicklasson before replacing him with Daniel Antonsson. In 2010, Dark Tranquillity launched “We are the Void”.
Dark Tranquillity will be playing in Silver Church Club on May 19, at 20:00. Tickets are available at 60 lei during March exclusively at shop.artmania.ro. Starting with April, tickets will be available also at myticket.ro and in Germanos and Diverta shops, at 75 lei, while in May their prices will be 90 lei. Offer valid for 200 tickets for the first presale and 300 tickets for the following presale.
An ARTmania event.