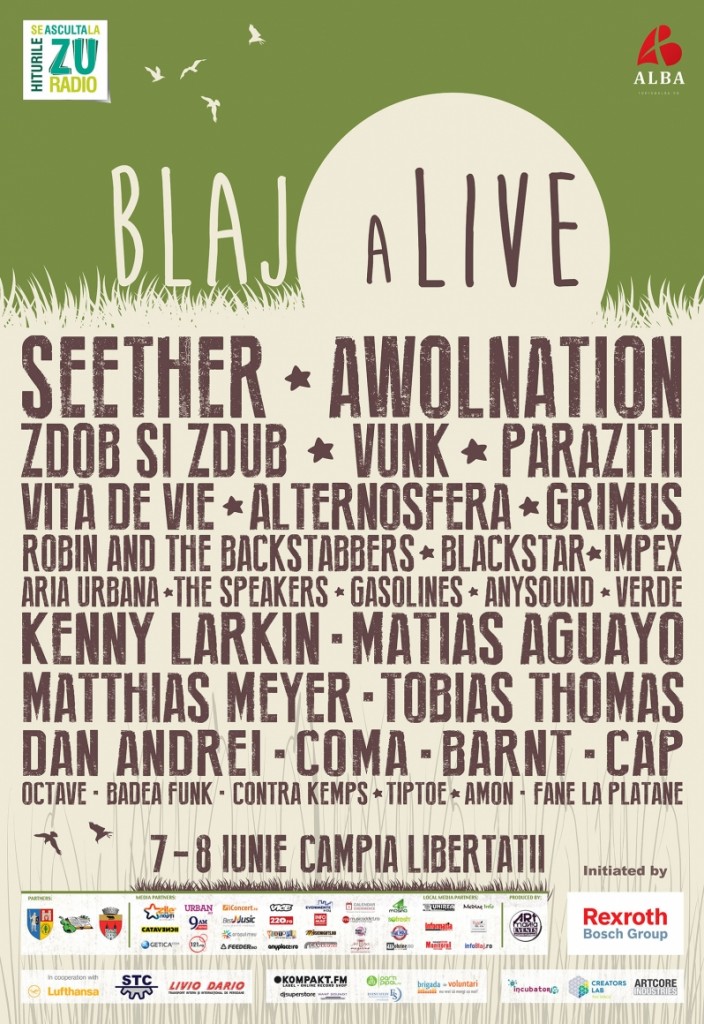 7 years ago11 months ago

On the Liberty Field, between June 7-8, 2014, the largest gathering of music, liberty and joy of life lovers will take place. Blaj, “the little Rome of Transylvania” becomes the centre of general attention and turns to life at Blaj aLive: two days and two nights of concerts and fun activities organized to entertain over 10,000 people. Awolnation and Seether, this year’s special guests, are coming to Romania for the first time straight to the Liberty Field.
After more than a decade playing and five albums released, Seether has demonstrated that it’s one of the most consistent, versatile, ambitious and successful post grunge and alternative rock bands of the world. With millions of records sold, receiving Gold and Platinum discs and a total of 11 number one singles in worldwide charts, Seether headlines Saturday night at Blaj aLive.

Sunday, June 8, Blaj aLive presents Awolnation the project that took the music industry by a storm in 2009. The band plays a mix of electronic rock, alternative and indie, grossing over 150 million views on Youtube with their most successful single, Sail.

Blaj aLive features three differently themed music scenes, bars and terraces, a variety of culinary specialities, sports and other recreational facilities, spaces for workshops and socializing, all in the same place 150 years ago, 40,000 people attended the Great National Gathering in Blaj. The best ways to reach the festival area are either by train or by car, the organizers offering a large parking space as well as the possibility of camping in an area of over 4,000 square meters.

The price for a simple pass, valid for the two festival days is around 6 euro, while a camping package including parking is around 12 euro, limited to 1,000 units. Tickets are available at MyTicket and Eventim and online at shop.artmania.ro. See you on the Liberty Field, between June 7-8, 2014, for a total festival experience. Blaj aLive is a project initiated by Bosch-Rexroth, organized in partnership with Blaj City Hall and Alba District Council, with the help of Cultural Centre „Augustin Bena” Alba, a project developed by ARTmania Events.