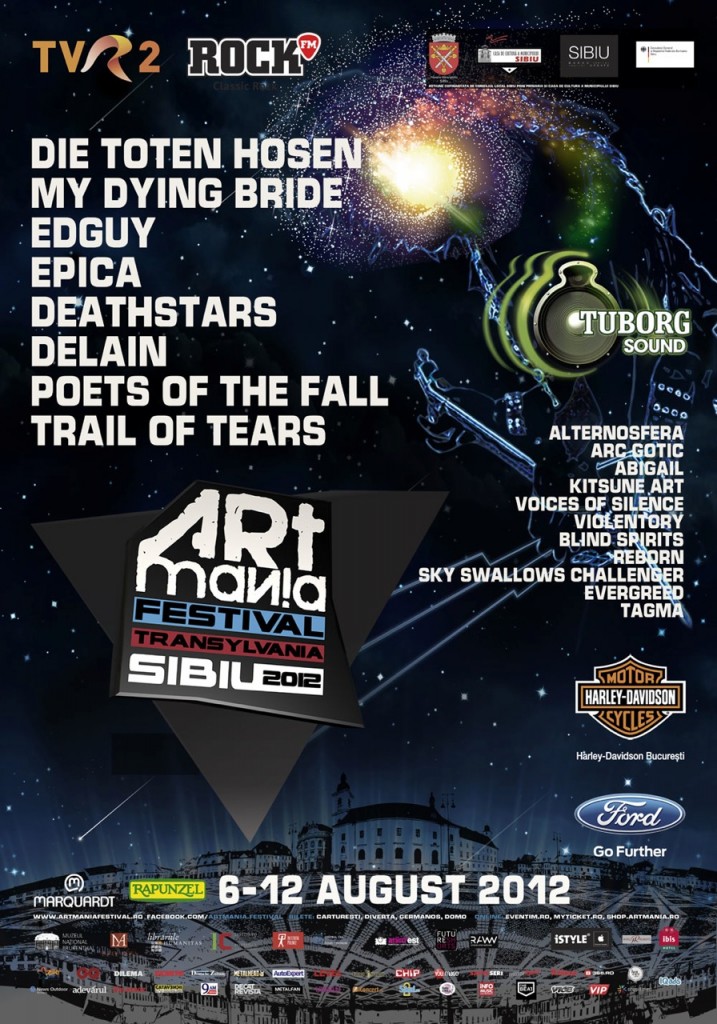 9 years ago1 year ago

The ARTmania cultural platform supports the bells arts, with an accent on the music directly linked to or derived from rock culture. Alongside its faithful allies and hosts of the event, ARTmania has become a well- known international brand, thanks to its specific concert program and its location in one of the most beautiful medieval citadels in Eastern Europe, Sibiu.

The ARTmania Festival has been endorsed by the City Hall of Sibiu from the first edition in July 2006. An important ally in the battle for musical dissemination is Tuborg, a known brand, integrated in the artistic schedule of the Festival through its Tuborg Sound platform. Tuborg Sound has been supporting the festival for three years, promoting not only the platform itself but also Romanian bands, either well known or just emerging. Starting last year the ARTmania Festival was joined by bikers under the Harley Davidson® logo, a brand which could not miss the annual meeting of free spirits.

The annual festival in Sibiu has become known over its six years of existence by promoting gothic metal artists or other metal genres, extending its coverage to heavy metal, punk and even alternative rock. Music represents the leitmotif of the festival, closely followed by visual arts, especially photography and painting. Promoted artists endorse the general concept of ARTmania through concert photography or festival related paintings. Indirectly linked projects are also welcomed since the festival’s mission is defined by drawing various contributions from the art domain, with a starting point in music. In this area one of the main concerns of the organizing party is facilitating the promotion of Romanian artist on the scene of an important international festival.

During the festival week, ARTmania strongly supports productions of the cultural institutions in Sibiu. Started two years ago, the collaboration between the Brukenthal National Museum and the ASTRA National Museum Complex has granted access to an impressive number of participants at the ARTmania Festival in museum areas as well as galleries, which have been highly regarded due to their priceless cultural heritage.

In 2012, the ARTmania Festival will take place between August 6 and 12 and will offer art amateurs a varied cultural program including concerts, exhibitions, workshops and other events dedicated to the fine arts. The concerts in the Large Square will take place on Friday and Saturday, 10th and 11th of August.

Refresh this page from time to time to get the latest updates on the line-up and other festival activities. This is an event cofinanced by the Local Council of Sibiu through the Town Hall and the Cultural House of Sibiu Municipality. More information is available on the web at artmaniafestival.ro. You can confirm your attendance by buying a ticket as soon as possible and check in our Facebook Event. Rock on!