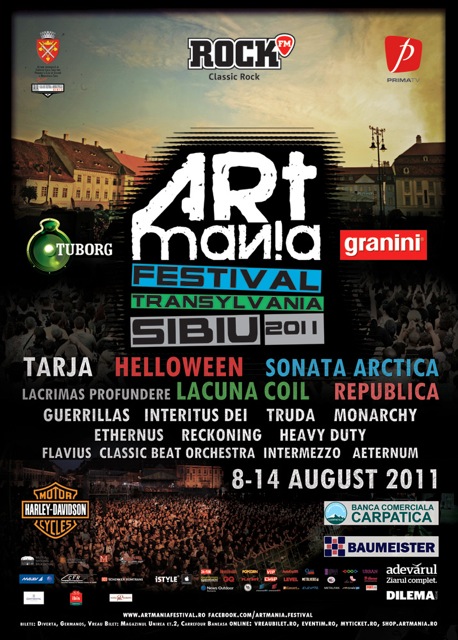 9 years ago4 months ago

The ARTmania Festival 2011 will be taking place during the second week of August in the citadel of Sibiu. The festival features a varied and rich program, suited for both the public and the atmosphere of the medieval fortress through concerts, exhibitions and special events dedicated to arts for seven days in August. The concerts in the Large Square will be taking place on Friday and Saturday, 12 and 13 of August.

With over 25 years in the music business, 13 studio albums, countless world tours and over five million albums sold Helloween is truly a leader of the metal music charts. The German legend comes to Sibiu to promote their latest album, “7 sinners”, and play some of their best-known songs like “Ride the Sky”, “I Want Out” and “Future World”. Helloween will hit the stage on Friday for an hour and a half show.

With a ten years career behind, Sonata Arctica has been an important name on the international music scene since their first album, Ecliptica, launched in 1999. Over the years, Sonata Arctica received four Gold discs for their record sales, nominations to the Emma Awards for either best band or best rock/metal album and played alongside Nightwish, Dio, Stratovarius, Iron Maiden, Rhapsody and Alice Cooper.

For gothic music lovers ARTmania Festival has invited to Sibiu Lacrimas Profundere. They have been playing gothic rock since 1993, and for their unique style Napalm Records has been representing them since 1999. Through their world tours they have proven to be a successful band, especially thanks to the Apocalyptica tour in 1997. Promoted by MTV and VIVA the Germans became famous shortly. For an unforgettable live experience we strongly recommend being present on August 12 at ARTmania Festival.

In 2011, Tarja Turunen, the queen of symphonic rock, sings at ARTmania festival in Sibiu, headlining Friday. Renowned for her incredible voice and her stunning live performances, the northern star has succeeded in making her third studio album one of the best productions of the moment. Tarja’s concert will be followed by a party dedicated to her.