Amorphis – The Beginning of Times 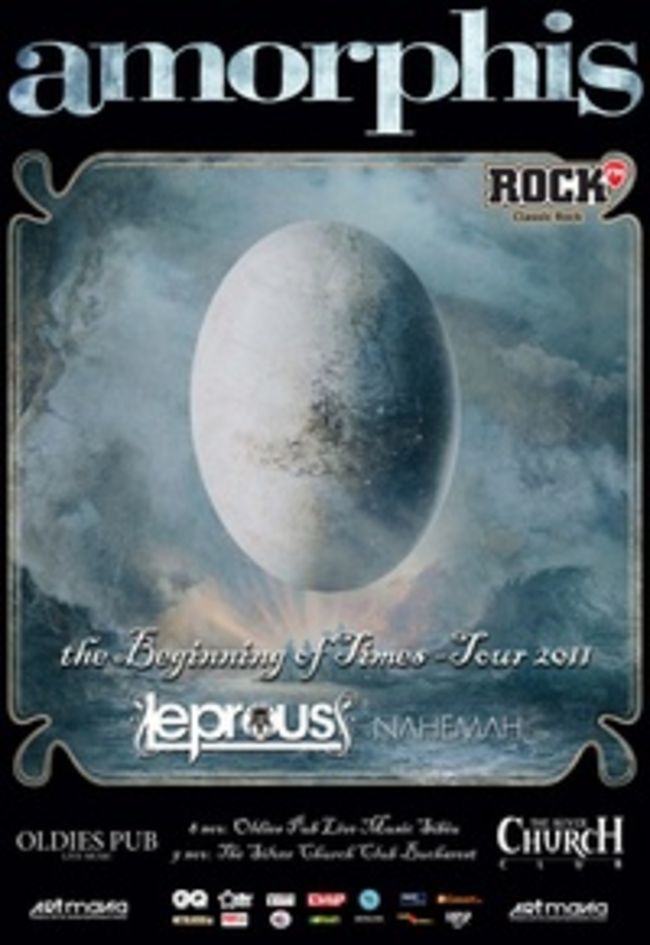 9 years ago11 months ago

Finnish band Amorphis returns to Romania in November for a live presentation of their latest material, “The Beginning of Times”, album to be launched on May 27th.

Romania is part of the first heat of the tour “The Beginning of Times”, scheduled to start this June and ending in 2012. For their Romanian fans Amorphis will be playing two concerts: in Sibiu on November 8th in Oldies Pub and in Bucharest on November 9th, in the Silver Church Club. Opening act for the Amorphis concerts will be two bands especially invited by the group to rise the tension of the main event (open doors 19:00; concert begins at 19:30).

“The Beginning of Times”, number 10 in the Amorphis discography is considered by the Finns their most ambitious project in their 20 years of existence. The new Amorphis album, inspired by Finnish mythology, centers the iconic hero Väinämöinen whose tale has been masterfully retold by lyricist Pekka Kainulainen, one of the most appreciated artists of Finnish contemporary art.

Along the 12 tracks the fans can listen to the well-known dark-rock melancholia of Amorphis, with strong emotions borne out of the naturalness, dark oneness and aggressive passages of the new melodic lines. Moreover, the first series of the digipack will include the bonus track “Heart’s song”.

„The Beginning Of Times” was produced by the band; vocals were recorded under the guidance of Marco Hietala (Nightwish, Tarot) in his home studio in Kuopio. Mmikko Karmila who was responsible for the mixing of other Amorphis albums is still present, while the cover artwork belongs to Travis Smith (www.seempieces.com) and represents a magnificent interpretation of the mythological birth of the world from a goldeneye s egg.

The Beginning of Times tour features other countries like Germany, Japan, Taiwan, Finland, Belgium, Czech Republic and Slovakia. With their visit in Romania this November, Amorphis adds to four their number of concerts here, being invited by ARTmania in 2009 (Arenele Romane), 2008 (Romexpo, with Haggard) and 2006 (ARTmania Festival in Sibiu).

Leprous will be presenting their latest album and will be the opening band for Amorphis during “The Beginning of Times“ tour. Heavymetal.no described them as unique: “there is nothing else that sounds like this band, and that will take them far…“ Leprous will be “shadowing“ Amorphis on their promotional European tours. However, Romania is not new territory for them, since they have already performed in Bucharest, in 2010, opening for Therion (in a show held at Arenele Romane).

Nahemah will be performing in the opening of Amorphis concert from Romania. The Spanish band joined the Norwegians from Leprous during the Amorphis tour organized for promoting their latest album, The Beginning of Times. Nahemah was born in 1997 and is named after one of the angels of prostitution who are included in the mosaic religion. The Iberians quickly received the public’s attention after publishing their first album. In 2001 appeared their second record, “Crysalis”. Nahemah style gathers various influences: from doom, black and death metal, with post rock, emo core and even hard core nuances. The Spanish band launched this year their forth disc, “A New Constellation”, which goes more in the experimental area so known to be a trait of Nahemah’s style, including special nuances of the keyboards, saxophone or voices. Nahemah are performing for the first time in Romania, but their career recommends them as one of the best current bands. The band already performed together with important names like Moonspell, Cult Of Luna, Moonsorrow or Alastis.

The tickets for the two concerts can be bought online at shop.artmania.ro, myticket.ro, eventim.ro or Diverta and Eventim distributors, for 60 lei until August 13th, 75 lei until November and 85 lei in event day.