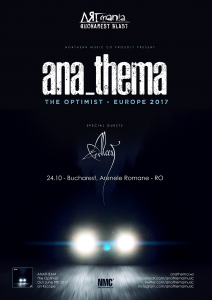 Anathema, one of the most famous British experimental, alternative rock bands returns to Bucharest with a new concert hosted by the second ARTmania Bucharest Blast event. The French band Alcest, the pioneers of the blackgaze subgenre, will accompany them on the stage. The show will take place on 24th of October 2017, starting 19:00 hours, at Arenele Romane, in Bucharest.

This new Anathema concert is part of the European promo tour for the band’s latest album, „The Optimist”, planned to be launched on 9th of June 2017, under the Kscope Records label. The new disc was registered during last winter and is described by the band as containing some of the darkest, most challenging and unexpected music the sextet have put their name to. The beauty, the intensity, the drama, the silence, the hope, the references to an extra-musical dimension, the very central elements of the bands journey through time, get a whole new depth.

The entire material, as Daniel Cavanagh mentions, a „journey”. „The songs are ambiguous. There is no right or wrong way to take them. Make of them what you will” he adds, thus underlining the chameleonic dimension of the new album which maintains the experimental route adopted by the band ever since its establishment.

The first track from their forthcoming new studio, „Springfield”, can be already listened on the following link: http://bit.ly/AnathemaSpringfield

The French band Alcest, established in 2000, is considered to be the founder of a new musical subgenre, the „blackgaze”, which combines black metal elements with sheogaze in a whole new unique sound. Its artistic path started with the „Le Secret” album (2005), continued with the „Shelter” (2014) and peaked with their most recent launch, „Kodama” (2016), which holds a double meaning in Japanese: „echo” and „the tree of life”.