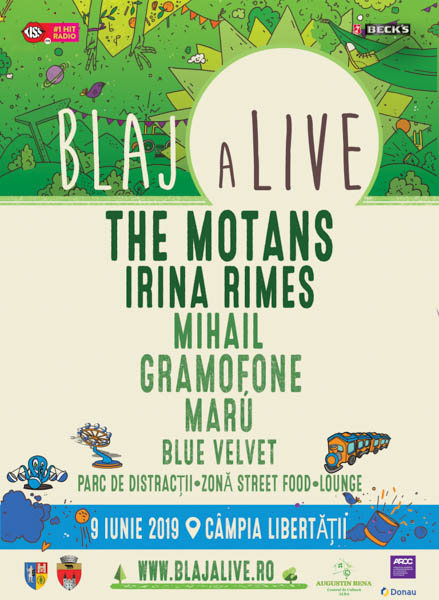 Irina Rimes and Blue Velvet are the new confirmations for the seventh edition of Blaj aLive Festival. Our most accessible multicultural festival will take place on June 9, 2019 on the Liberty Field.

Irina Rimes and the first Romanian artist that has written not one, but two musical trilogies: “Iubiri Secrete” and “Trilogia II”. Not only does she compose all of her songs, but she also writes for other well-known artists like INNA, Antonia or Andra.

Her debut single, “Visele” charted on top positions in all official musical tops in Romania. With over 14 million views on YouTube and a spot at the Top10 Media Forest Chart, “Visele” marks a spectacular debut for the artist’s musical career.

In 2017, Irina released “Despre El”, her debut album. Based on her stories and personal feelings, the album includes 10 songs, completed by a short-film. “Bandana” feat. KillaFonic, “Bolnavi amandoi”, “Cosmos”, „Octombrie Rosu” and „Eroii Pieselor Noastre” are songs that are featured in the short-film of the album. The five tracks had impressive results on digital platforms but also on “YouTube Trending”, “Bolnavi amandoi” raking first in both radio and TV charts.

2018 marked Irina Rimes’ debut as a juror in The Voice of Romania, as well as the release of her second album, “Cosmos”, a collection of 12 songs launched as more than a CD, but as book. The book also includes a set of poems written by Irina and set of photos of the artist.

Blue Velvet, a project familiar especially to Cluj audiences, is defined as a complex of emotions, intrigue and poetry brought together by a dynamic sound, as presented by the song “In vis”. The band was formed in 2016, as an alternative genre project, with trip-hop influences, where one can find sounds similar to that of the British group Portishead.

Most of the Blue Velvet songs are written in Romanian, being marked by a profound sound, emotional and electric, completed by a energizing stage presence. Blue Velvet are already known in Cluj, being preset at events like Jazz in the Park, Jazz in the Street or the Christmas Fair.

At Blaj aLive Festival 2019, Irina Rimes and Blue Velvet will hit the Freedom Stage along The Motans, Mihail, Gramofone and Marú.

At the Large Gathering at Blaj aLive Festival the fans will listen and dance in the nature on the rhythms of some of the most loved artists taking the Freedom Stage. Festival goers will be able to relax and enjoy different foods in the lounge area or in the food court, having the opportunity to spend time between concerts at the amusement park or taking part in different creative activities in the festival.

Tickets for the festival day will be 60 lei and can be bought online at blt.ro and www.blajalive.ro.