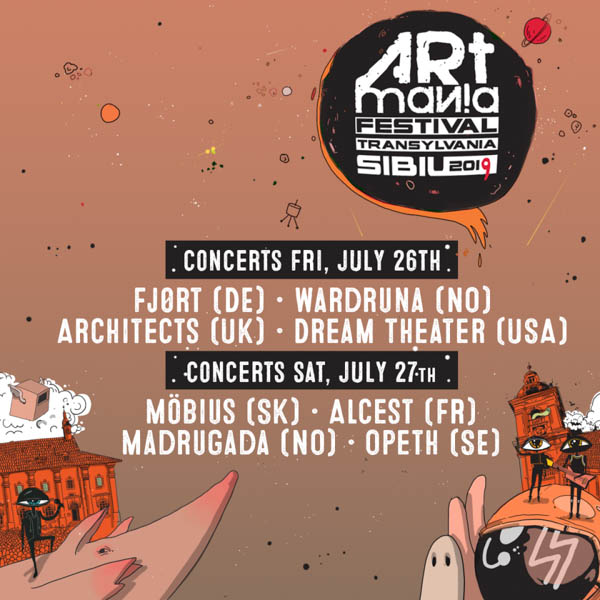 FJØRT and MÖBIUS are the two new names that complete the ARTmania Festival 2019 line-up that will take place on July 26-27, 2019, in the Large Square of the medieval citadel of Sibiu.

The history of the post-hardcore band Fjørt began in Aachen in 2012. Just after the release of their first EP, under the Through Love Records umbrella, the band began gaining traction on the local scene. Their creative effervescence continued to animate the band and shortly, they released three more new albums with positive reviews.

Their success came with the opportunity of playing on the same stage with world-renowned bands in sold out tours, in crowd-moving shows, bursting with energy, in spite of the fact that Fjørt is just three member band. If, most times band reaching commercial success slow down the rhythm and the virulence of their compositions, opting for a safer play, Fjørt do just the opposite.

They still experiment and explore new way of musical expression, sometimes hard to foresee, oscillating between aggressive or hardcore approaches and dreamy directions, characteristic to post-rock influences found in bands like Mogwai or Envy.

The mantra that animates the Slovak duo Möbius is one that encompasses in just a few words the reality of our contemporary society: words are useless and silence is inconsolably empty. In spite of all appearances, there is a link between the band’s name and topology. The name Möbius is directly inspired by the founder of topology, Ferdinand Möbius.

This mathematical discipline, concerned with objects in space with special qualities, fittingly captures the essence of the duo’s music. Similar to the science that has inspired them, Möbius cover a large specter of frequencies, flirting in their musical journeys with influences from stoner rock or sludge metal, a sub-genre of heavy metal music that combines elements of doom metal and hardcore punk, with the odd grunge and noise rock influences.

The band’s fourth album, The Magic of Macabre, which follows the Path of Nothingness demo is proof for a stubborn complexity and sometimes dark and aggressive riffs, completed by mantra defining rhythms.

Due to reasons pertaining to her pregnancy, Amalie Bruun (known musically as Myrkur) has decided to cancel all future concerts, including the one planned for Sibiu.

Day tickets for the festival

These day tickets can be bought online, in advance, on artmaniafestival.ro for 260 lei in the ticket section on the homepage.

Passes for the 2019 edition of ARTmania Festival are also available at www.artmaniafestival.ro for 320 lei. Next price category will be 360 lei.

During the ARTmania Festival the East European Music Conference also takes place, the first local international music conference, dedicated to professionals in the music industry. With its third edition, the event is a meeting spot of the Romanian music industry with some of the most important European cultural actors and some of the most important experts in the field.