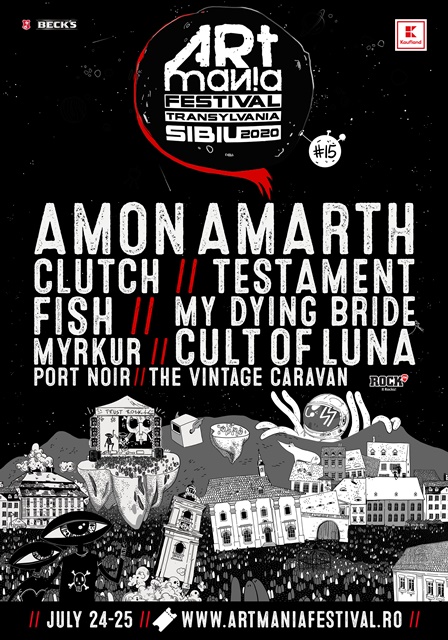 Fish, Port Noir and Testament continue the confirmation series for the 15th edition of the ARTmania Festival that will take place between 24 – 25 July 2020 in the Large Square of the medieval citadel of Sibiu,

The Legend of progressive rock and former lead singer of Marillion, Fish (UK) will play in premiere in Romania, at ARTmania Festival, the artist choosing this festival as part of his promotional tour for his last album.  Derek William Disk is his real name and the Scottish artist has earned the respect of the music industry in over 40 years of career, coming out in the limelight with his amazing voice (described among others like a joining between Roger Daltrey and Peter Gabriel) and with his lyrics, considered “poetic prose”.

Thanks to his distinct voice, musical talent and remarkable stage presence, Fish occupies spot 37 in the “Best Rock Voices” top launched by Planet Rock (in 2009) and is charted 49 in “The 100 Greatest Frontmen” top realized by Classic Rock in 2004 (Classic Rock is a well-known British magazine, part of the same media holding as Metal Hammer and Prog).

Fish has consolidated his international fame as vocalist of the well-known progressive rock band Marillion, with whom he contributed to the development of the musical industry from 1981 to 1988. To this we add his solo career, where Fish explored more artistic areas, from rock, to folk or contemporary pop, artistic journeys turned into ten albums greeted with enthusiasm by profile publications and fans of the progressive genre. From his debut material, „Virgil in a Wilderness of Mirrors”, released in 1990, which reached the first positions in the European charts Fish’s records have attracted positive reviews or passionate conversations between the listeners.

His latest album „Weltschmerz”, scheduled for release in May will also be the last chapter of this musical journey, according to the artist himself. In order to close the circle, the promotional tour of this last studio album, Fish will play songs from his first solo album as well as songs from “Weltschmerz”. Fans of prog music are in for a special music experience at the ARTmania Festival.

Port Noir (SE), an “alt rock trio” continuetheir ascend in the international music stage with ARTmania Festival and are preparing a show that will energize the audience with a novel mic of old school rock, with creative insertions from progressive, hip hop or R&B influences. Launched in 2011, as a project of Love Andersson (bass, vocals),  ), AW Wiberg (drums) and Andreas Hollstrand (guitars, keys and backing vocals), Port Noir has rapidly attracted the interest of the musical community through the fresh mix that is proposes, inspired by the style of very different names like  Queens of the Stone Age, Daft Punk, Rage Against the Machine or The Weeknd.

From the debut material, “Puls” (2013) to “Any Way the Wind Carries” (2016) to the most recent, “The Routine”, the band has continued its rising, touring alongside bands like precum In Flames, Pain of Salvation or Karnivool.

Testament (SUA), one of the most important American thrash metal band arrives in Sibiu. The band is part of the same generation as “The Big Four”, a series of bands that popularized the thrash metal genre. For this reason, the wave of Bay Area bands coming out in the 80s where also known as “The Big Eight” of thrash metal.

The project started its story in 1982 in Berkeley, California, under the name of Legacy, which will be used for three years and finally will title their debut studio album. Over its 40 year career, Testament has left its mark on several generations of artists, offering an immense legacy: 12 studio albums (the thirteenth to be released this year), four live albums, five compilations, 12 singles and 3 DVDs, that add up to 14 million discs sold worldwide. And all of this they’ve done staying faithful to their belief of bringing to light the hard, virulent and in the purest form, specific to metal, a message, in no way sweetened and uncompromised.

Acknowledgement from the music industry came quickly, Testament won Best Album at the Metal Hammer Golden Gods Awards in 2008 and reached top 12 in the Billboard Album 200 with the release of the Dark Roots album, which sold 20,000 copies in the first release week.

The newest chapter in the Testament story will be written this year, by releasing their 13th album, Titans of Creation. The album comes with the idea of keeping alive the traditional roots of the thrash metal genre and enriching them with progressive ingredients, ending up with a surprising and complex mix. The listener will be taken through a variety of moods with the help of each song, all the tracks following this red light of creation, a process followed by the inevitable destruction. And all this variety of emotional states and all the energy featured in a live Testament show will be experimented by the audience present at the anniversary edition of ARTmania Festival.

The three new confirmations will hit the ARTmania Festival stage alongside the other already confirmed artists: Amon Amarth, Clutch, Cult of Luna, My Dying Bride, Myrkur and The Vintage Caravan.

Passes for the anniversary edition of ARTmania Festival can be bought online at artmaniafestival.ro, blt.ro, iabilet.ro, kompostor.ro and eventim.ro. At the moment there are still 500 pieces available at the special price of 290 lei. After this lot is sold out, a new presale will begin with tickets priced at 320 lei.

From the beginning, ARTmania was built as a cultural platform destined to offer the public as many events and modes of experiencing various forms of artistic expression: concerts, exhibitions, book launches or film projections. This common meeting space of artists and audience at a sound, colour, image or literary level, hosted by the Large Square and by the medieval citadel, create the space where the story and magic represent, in essence, the festival spirit.