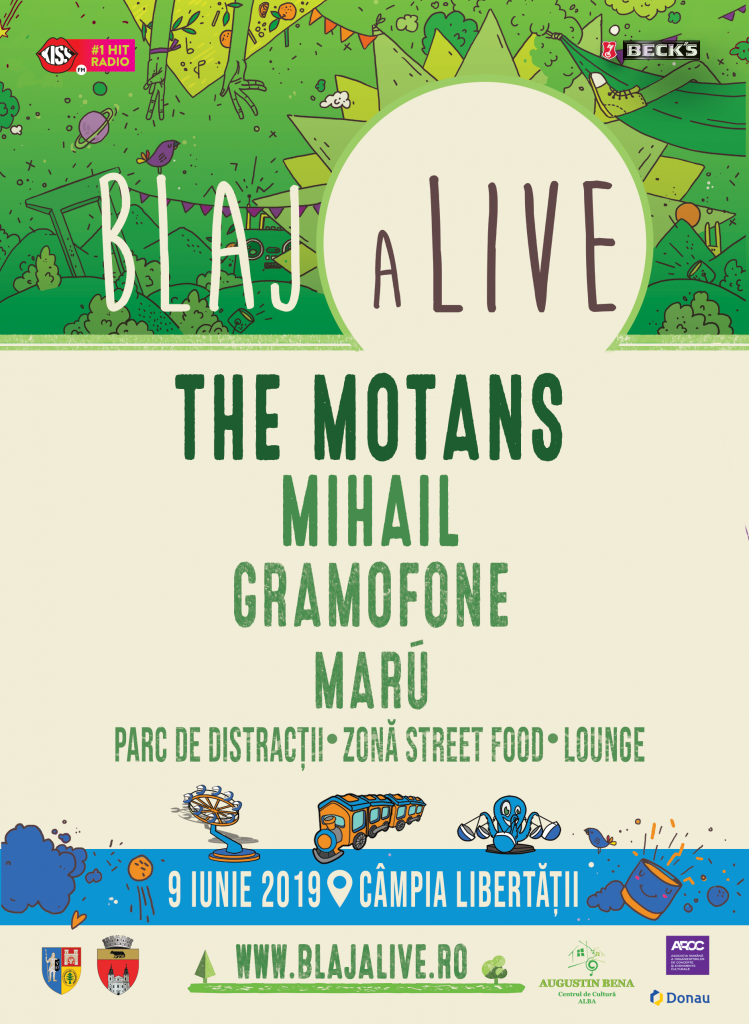 Blaj aLive Festival greenlights the news: The Motans, Mihail, Gramofone and Marú are the first artists confirmed for the seventh edition. Blaj aLive, our most accessible multicultural festival will take place on June 9, 2019 on the Liberty Field.

At the Large Gathering at Blaj aLive Festival the fans will listen and dance in the nature on the rhythms of some of the most loved artists taking the Freedom Stage. Festival goers will be able to relax and enjoy different foods in the lounge area or in the food court, having the opportunity to spend time between concerts at the amusement park or taking part in different creative activities in the festival.

Concerts and premieres on the Liberty Field

THE MOTANS, one of the fast-rising stars in our music is coming for the first time on the Liberty Field! The Motans is one of the modish artists of the moment, offering good vibe seekers some of the most appreciated hits in Romania in the last few years.

The project was released in 2016 with the “Versus” single, that won music listeners hearts from the first play, and quickly became a phenomenon. What followed is even more surprising. Most of its releases turn into an instant hit with the public, but are also endorsed by radios and TV channels nationwide. #1 is a position the artist is already familiar with, most releases by The Motans charting first in commercial music tops.

MIHAIL, one of the eclectic artists of the Romanian music, known thanks to his song “Ma ucide ea” and will hit the Freedom Stage for the first time.

Mihail took the Romanian pubic by surprise with the “Ma ucide ea” song, that was ranked second most streamed song in 2016, thanks to funk, blues, pop influences and the story  dedicated to all those who lived that special moment when two pairs of eyes meet at ignite, even for a second, passion.

The song has over 70 million views of YouTube, but this was only the beginning as the artist has taken this opportunity to reinvent himself and bring a new sound to his project.

GRAMOFONE is the source of hearty music that transmits a message we can all resonate with and is present for the first time at Blaj aLive!

The Gramofone story starts in the summer of 2013, with a couple of instrumental experiments put together in the “Intervention” EP. Over time, the experiments took more complex and bold forms. This way the album “Confession from the Belly of the Beast” was born, a musical discourse that puts under the magnifying glass universal aspects of the modern society, inspired by the present reality but also from a dystopic universe.

MARÚ, one of the fast-growing artists in the Romanian music scene brings, for the first time on the Freedom Stage, a full of emotion soulful pop.

Marú is a composer/singer and multi-instrument player whose crystal-clear voice will convince any music listener to put her on repeat. After six years at the Vienna Conservatory, Marú has developed her own personal style, that reminds us of Angus & Julia Stone, Norah Jones, Ed Sheeran, Kate Bush, Elise Trow, Bat for Lashes, influences abundantly sprinkled with authenticity and that quelque chose that only she has. For those who enjoy listening with their mind, body and heart, Marú brings to Blaj aLive a unique gift: her music, music by Marú.

Tickets for the festival day will be 60 lei and can be bought online at blt.ro and www.blajalive.ro.