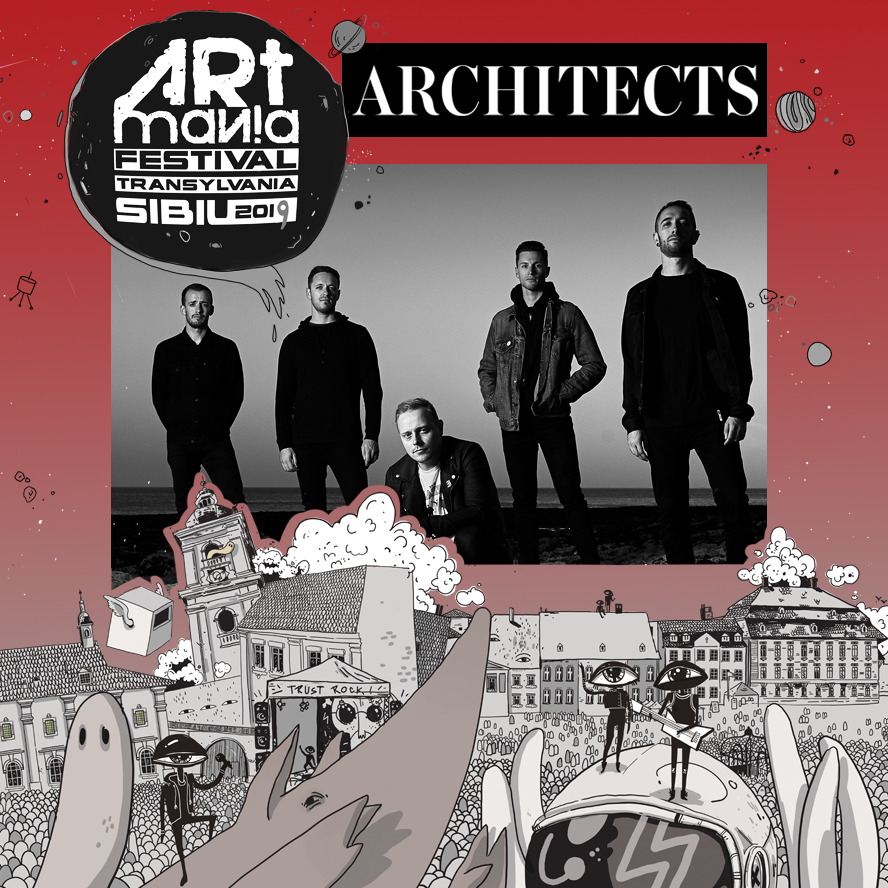 ARCHITECTS, the well-known British metalcore band, is the latest name confirmed for ARTmania Festival 2019, taking place between 26- 27 July, 2019, in the Large Aquare of the medieval citadel of Sibiu.

The group was founded in 2004, in Brighton, UK, by twin brothers Dan & Tom Searle and has been awarded titles like Best British Live Bands, while their songs have been described as “complex and impressively crafted hymns” by the British newspaper The Guardian.

Initially, the project was titled “Counting the Days” and featured a harsh sound, dominated by a chaotic energy and complex rhythms, the songs composed at time time being influenced by The Dillinger Escape Plan. After the release of the first two albums (Nightmares – the debut album, 2006 and Ruin, 2007) and Deadswans, a slip EP (2008), the group was signed by Century Media Records, which lead to release of their third album, Hollow Crown (2009).

While Here and Now marked a change towards melodic post-hardcore, their next album, Daybreaker (2012), shifted back to their original sound, but also meant a reaching of balance between the melodic sounds and the harsh ones that dominated their musical beginnings. Daybreaker was the point where political lyrics appeared, as well as other topics on the public agenda, in contrast with the fun topics of previous albums.

ARCHITECTS also have their own documentary, One Hundred Days: The Story of Architects Almost World Tour, released in 2003, when they also signed with Epitaph Records (an independent American label, run by Brett Gurewitz, guitarist of 80s group Bad Religion). With Epitaph Records, the band released Lost Forever//Lost Together, the album that made them famous and brought them the appreciation of international music critics, propelling them between the most appreciated names in world music.

2016 meant the release of their seventh album, All Our Gods Have Abandoned Us, but it was also a difficult time for the band – Tom Searle (founding member and main composer), dies after a long battle with cancer. Dan, his twin brother, would say this was the moment “he started wondering what was left for me, for us”, a moment when, “we, who were friends first, we needed to find something”.

And they eventually found a solution, as Dan Searle remembers: we had two options – to believe that the world we live in is a horrible place and let all these things defeat us or let everything that’s coming towards us, be it good or bad, inspire us to live the life Tom would have liked for us. And we chose the second option.

The results of this difficult choice can be listened to on Holy Hell, the first album after the death of Tom Searle. This album is considered by ARCHITECTS members a great responsibility because, as Dan would say: “We were afraid people might get a wrong impression by listening to this album. In order to prevent that, we tried leaving a ray of light at the end of the tunnel, for all those who have or are going through the same hard experiences as ourselves”. Holy Hell is the band’s eight album and its first promotional single was Hereafter.