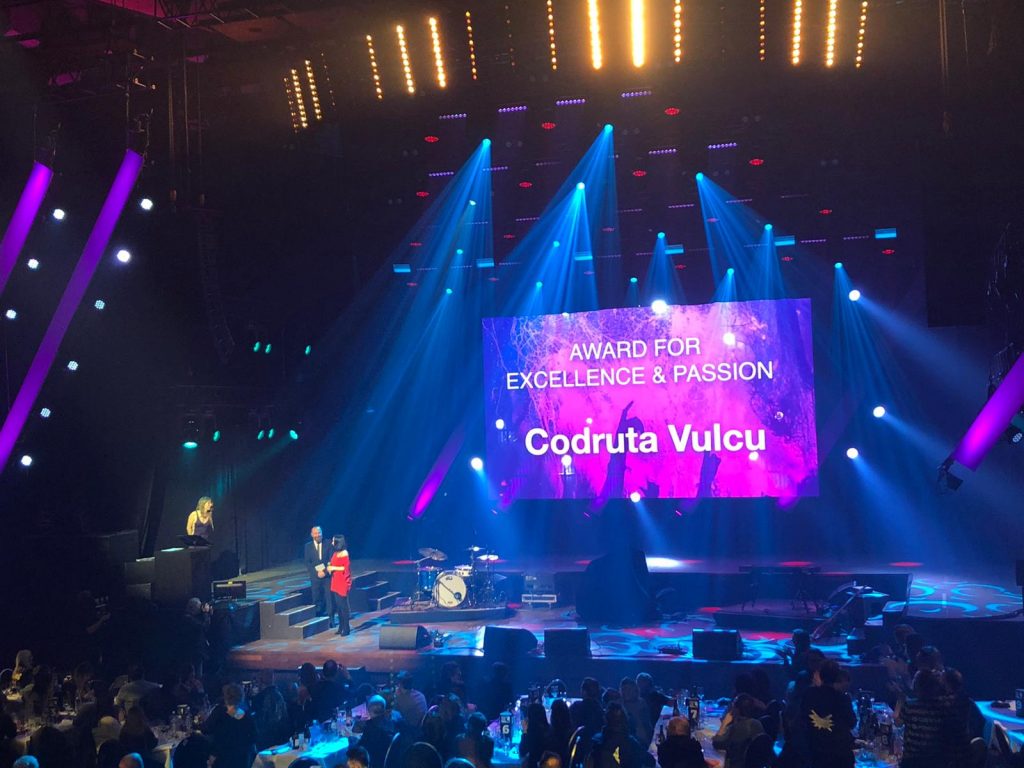 Codruta Vulcu was elected winner of the category “Award for Excellence and Passion” at the European Festival Awards competition, being the first Romanian to ever receive an award during the 11 years history of this prestigious international competition. The award was given during the Award Gala of European Festival Awards that took place last night in Groningen, The Netherlands.

In the category “The Award for Excellence and Passion” are nominated professionals that have contributed to the development of the music industry at an international level, Codruta Vulcu being on the short list along important names of the European music business.

Codruta Vulcu  is CEO of ARTmania Festival, East European Music Conference and Blaj aLive Festival and President of AROC (The Romanian Association of Concerts and Cultural Events Organizers), with an experience of over 16 years in the music industry and a vast portfolio of events that also includes the organization, logistically and operationally, of the official ceremonies held last year on the Liberty Field in Blaj by His Holiness, Pope Francis.

“I’m extremely honoured to receive such a distinction from the jury of this traditional European event. It is a unique moment in the career of a professional and I am very happy since this certification represents an acknowledgement of the activity and results obtained by a representative of Romanian music industry, who has known an amazing evolution in the last few years. It was a remarkable evening for us a country, two Romanian festivals also winning at the categories they were competing in. Congratulations to all.
I would also like to personally thank all our colleagues and collaborators so far for all of their efforts and our partners and sponsors, and, of course, the artists and our public who has been part of the projects we’ve developed since 2006 until today, stated Codruta Vulcu, CEO of ARTmania Festival, East European Music Conference and Blaj aLive Festival and President of AROC (The Romanian Association of Concerts and Cultural Events Organizers).

At the 2019 edition of European Festival Awards, Codruta Vulcu received the award for “Best Small Festival” for the ARTMania Festival in Sibiu (who turns 15 in 2020), outmatching an impressive number of votes and registrations, according to the organizers. In the “Best Small Festival” category only festivals that have a maximum of 10,000 attendees per day can compete.
European Festival Awards is the most important competition dedicated to the European music industry, launched in 2009 by Yourope ( The European Association of Festivals) in order to offer professional acknowledgement of the international industry of such events and specialists that have outstanding results and raise the bar on quality in this domain on an European level (standards evaluated under different aspects like: health & safety, social responsibility, innovation, sustainability).
The competition includes 15 categories like „Best New Festival”, „Best Indoor Festival”, „Best Small/ Medium-Sized/ Major Festival”, „Agent of the Year”, „Promoter of the Year”, „The Award for Excellence and Passion”, „The Green Operations Award” or „The Health & Safety Innovation Award” etc.
The award gala for the European Festival Awards takes place every year during the Eurosonic Noorderslag, event that includes one of the most important international conference of this profile, dedicated to the music industry and one of the largest showcase type festivals in Europe.

From the beginning, ARTmania was built as a cultural platform destined to offer the public as many events and modes of experiencing various forms of artistic expression: concerts, exhibitions, book launches or film projections. This common meeting space of artists and audience at a sound, color, image or literary level, hosted by the Large Square and by the medieval citadel, create the space where the story and magic represent, in essence, the festival spirit. As the longest rock festival in Romania and one of the traditional brands in the regional cultural scene, ARTmania has outlined its own identity through a bold concept an a special medium: the Large Square of one of the most beautiful medieval citadels in Eastern Europe – Sibiu citadel.

ARTmania Festival in founding member of AROC – The Romanian Association of Concerts and Cultural Event organizers that includes among its founding members some of the most important promoters in Romania like Emagic, Events, Electric Castle, Summerwell or Twin Arts, among others.

During the ARTmania Festival the East European Music Conference also took place, the first local international music conference, dedicated to professionals in the music industry. With its third edition, the event is a meeting spot of the Romanian music industry with some of the most important European cultural actors and some of the most important experts in the field