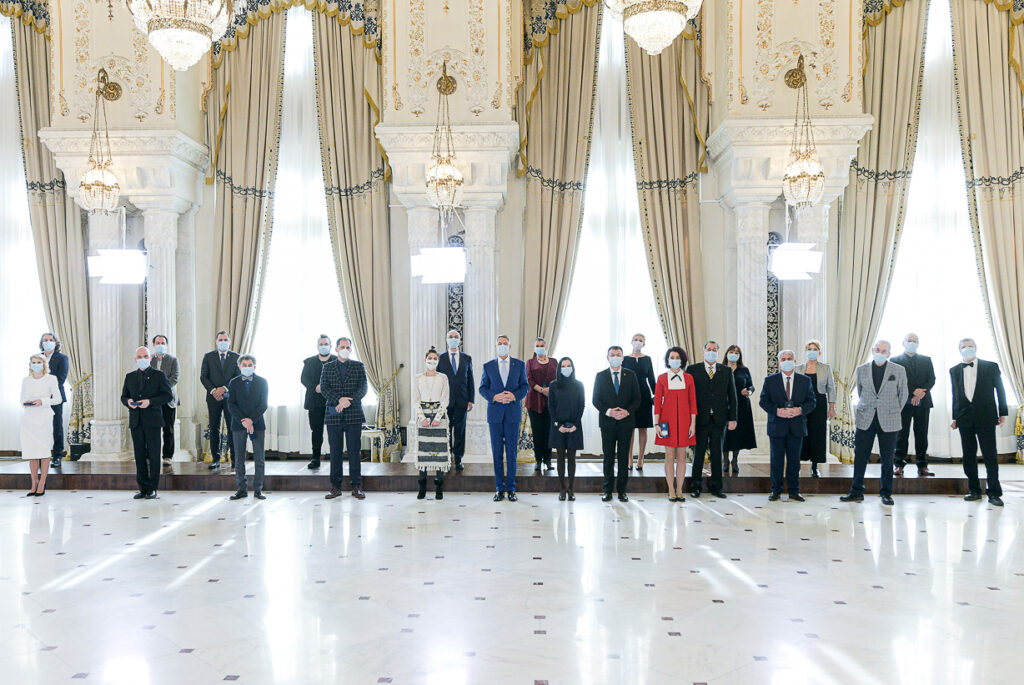 Codruta Vulcu received “The Cultural Merit” Medal from the President of Romania, His Excellency Klaus Werner Iohannis, during an official ceremony organized on 15th of January 2021, at the Cotroceni Palace, on the Romanian National Culture Day.

“The Cultural Merit” Medal is a civil decoration offered to Romanian or foreign citizens as an official recognition of their talent and the services, with local or regional impact, brought to culture, arts, science of promoting social work.

Codruta Vulcu is the Director and Founder of the ARTmania Festival, East European Music Conference & Showcase Festival, Blaj aLive Festival and Romanian Music Export and AROC Vice president (the Romanian Association of Promoters of Concerts and Cultural Events), with a seventeen-year long career in the artistic sector and a rich event portfolio which includes organizing, from a logistic and operational point of view, of the official ceremonies held in 2019 by His Holiness Pope Francis on the Field of Liberty, in Blaj, Romania.

“I am honoured to receive this special distinction, unique in the life of a professional. It is an acknowledgement which belongs to all those who believed in me and taught me, a distinction that belongs to each colleague and collaborator that has been by my side during my seventeen-year long career in the artistic sector. Developing and launching international projects like ARTmania Festival or Blaj aLive, establishing a Musical Export Bureau as well as successfully organizing the ceremonies during the official visit of His Holiness, Pope Francis, on the Liberty Field in Blaj, in 2019, are the results of an entire team.

The music and festival industry has significantly developed in the last few years and managed to bring Romania to the same level of well-known European festivals. Also, today, at a global level, change and uncertainty seem to be the only constants that generate the most controversial conversations, on the public agenda, while culture is severely shattered by the COVID-19 pandemic.

And yet, in this unprecedented context, culture needs to exert a vital social role: that of recalibration, tolerance and humanity. That is why, I believe that supporting the survival and reopening of the cultural sector is primordial. A reopening which should be founded on discussions carried on by all the involved parties and unfolded on the basis of the very same values promoted through culture: an open and constructive dialogue, balance, harmony and community”, declared Codruta Vulcu, Director of ARTmania Festival, East European Music Conference & Showcase Festival, Romanian Music Export, Blaj aLive Festival and AROC Vice president.

Last year, Codruta Vulcu received the „The Award for Excellence and Passion”, at the European Festival Awards (EFA), being the first Romanian to ever receive this distinction in the 11 year-long history of this renowned international competition. Also, during the European Festival Awards’ 2019 edition, Codruta received the trophy of the „Best Small Festival” category for ARTmania Festival (which would have celebrated 15 years of existence in 2020), outrunning an impressive number of submissions and votes, according to EFA organizers. For the „Best Small Festival” category, festivals with a 10,000 persons per day participation rate can compete.

European Festival Awards is the most important professional competition dedicated to the European music industry, being established in 2009 by Yourope (The European Festivals Association) with the aim of recognising and celebrating the collective accomplishments of the continent’s most beloved industry. Across its 15 categories, the Awards acknowledges the achievements of organisers and suppliers in the field and honours the festivals and individuals that push the boundaries in health and safety, social awareness, forward thinking and sustainability respectively.