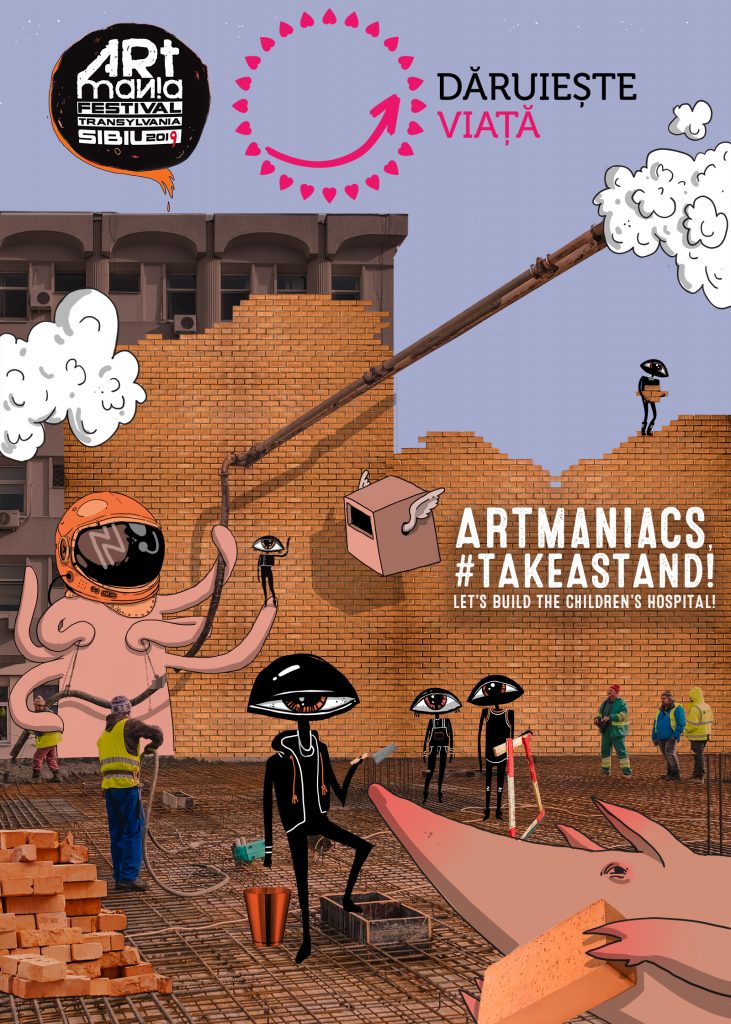 ARTmania Festival, organizer of ARTmania Festival in Sibiu and East European Music Conference & Showcase Festival, implements starting with the 2020 edition, in premiere for a Romanian festival, the concept “Donation for invitation”.

The announcement was made during the third edition of East European Music Conference & Showcase Festival, the first local international conference dedicated to professionals in the musical industry, that took place between 25 – 27 July 2019, turning into the meeting and talking point for the Romanian musical industry and cultural operators with some of the best experts in the area.

„Only those who work effectively in event production will have access in the festival area without paying either for a ticket or for a fraction of its cost when it comes to invitations. The sums paid will directly reach a cause the Festival supports that year. For 2020, the cause that ARTmania Festival supports is the construction of the first Oncologic and Paediatric Radiotherapy Hospital built in Romania in the last 30 years, a project of the Daruieste Viata Association, stated Friday in Sibiu, in the first panel of the East European Music Conference 2019, ARTmania Director, Codruta Vulcu.

“We are happy that ARTmania joins the initiative #NoiFacemUnSpital (We are building a hospital) and that ARTmania fans can donate, during the event, for the first Oncologic and Paediatric Radiotherapy Hospital in Romania. Moreover, the festival has built around itself an amazing community, of people who are involved and understand to make things happen. I believe that the idea “Donation for invitation” is a good way to educate and teach accountability – people have to learn to show respect for the efforts of others, but also take responsibility for their actions. In our case, any donation can be tracked on the fundraising platform “Bursa de fericire (The happiness stock)” and people can see exactly where their investment went”, stated Oana Gheorghiu, founder Daruieste Viata.

ARTmania considers that a festival is more than a place where people gather to listen to live music. “A festival is a community, is a miniature society, if I can say so, states Codruta Vulcu. And every community has power, that most times, is greater than the sum of individuals that make it. And this community would be nice and well to activate itself for a common social cause just to give value to this power it has”, added the festival director.

Alongside Codruta Vulcu, at this panel there were present the Executive Director of the Sibiu Community Foundation and International Sibiu Marathon, Ciprian Ciocan, Camelia Grigore MD, Manager of the Sibiu Paediatric Hospital, Oana Giurgiu, Executiv Director of Transylvania International Film Festival (TIFF) from Cluj and one of the founders οf the Daruieste Viata Foundation, Oana Gheorghiu.

The ARTmania Festival – Daruieste Viata partnership entails support on more areas. Apart from the direct support of the ARTMania community members, offered by direct donations at the Daruieste Viata tent, which was built on the festival site, all the donations made from the festival invitations for next year’s festival edition will go towards the foundation as well.

Moreover, the festival organizers have taken upon themselves to involve the artists of this year’s edition as well, and they have gladly autographed different objects that the fans will be able to bid on during a charitable event. These proceedings will also go towards supporting the Hospital.

“The artists with whom ARTmania has worked over the years have remained close to us, therefore we have many more surprises for our fans, surprises we will dedicate to the cause as well, in order to be auctioned to benefit the hospital construction, added the festival director.

#takeastand a concept that is getting more and more traction and brings on more European festivals, concept initiated and promoted by European Festival Association – YOUROPE. “Take a stand” entails, that beyond the music that brings together music fans, festivals should support through the platforms they themselves turn into, through precise actions or through awareness, important and relevant social causes.

Festivals have passed the point where they are just simple stages where artists play and some people come and see them, they are now a way of life, and a healthy existence should also have this component: the care for those around us. Whether we are talking about sick children that our country fails to take care of in a decent way, whether we are talking about recycling, or plastic usage. People have to know these problems and naturally, once they are aware of them, to help those causes meant to repair dysfunctionalities, stated Codruta Vulcu, the “brain” behind the ARTmania Festival.
In 2020, ARTmania Festival, event organized in the Large Square in Sibiu, reached its 15th edition.

The Sibiu Conference is organized in association with AROC – The Romanian Association of Concert and Cultural Event organizers, that includes as founding members some of the most important promoters in Romania like: Emagic, Electric Castle, Summerwell, ARTmania or Untold, among others. EEMC is a project supported by Kaufland Romania.

SIBIU – Festival City – East European Music Conference & Showcase Festival 2019” is a co-financed action by the City Hall of Sibiu and the District Council of Sibiu.

“SIBIU – Festival City” is a multicultural project with the object of reconfirming the status of the town of Sibiu as an important player on the European market of culture consumers and producers of cultural events. With a remarkable tradition and experience in organizing and promoting large events, Sibiu becomes the regional platform for dialog for all the entities involved in the showbiz industry, not only in Romania, but also in Europe, and takes on the role of promoter in attracting international investments, with a direct impact on citizens and local authorities.

With its third edition, that took place between 25-27 July, 2019, the international reunion East European Music Conference (EEMC) has taken on the mission of keeping a healthy debate between the entities that are active in the Romanian Musical industry, starting with representatives of the private sector – show organizers, to international experts and directly involved state authorities in decision making processes.

In the context of a market in a continuous development process in the last couple of years, the local promoters are still conducting business in a confused environment, with an outdated legislation, that does not include specific provisions for the concert and festival industry, therefore the existence of a communication platform that facilitates the direct contact and punctual troubleshooting is necessary. The local organizers will look for solutions in an experience exchange with local and international promoters. Without significant change to the existing laws in Romania, without changes in laws as result of healthy debates there can be no rapid or healthy changes in the local market. The mission EEMC has taken on long term is to support the evolution of the local live event sector and alignment with the European industry standard on festivals and concerts.

East European Music Conference took place at the same time as the ARTmania Festival (14th edition) thus contributing to the transformation of Sibiu, through music and art in a veritable European Cultural Capital.

About ARTmania Festival
ARTmania Festival, the first Romanian festival that developed the idea of joining art and entertainment, is a platform dedicated to promoting all forms of artistic expression inspired by the rock culture. Over the years, ARTmania has established itself as a regional promoter of contemporary musical projects. But, ARTmania Festival does not mean just concerts from big international or local artists. Music is a base component that started everything, but it represents just a part of the experience the festival has tried to offer Romanian and international art lovers.