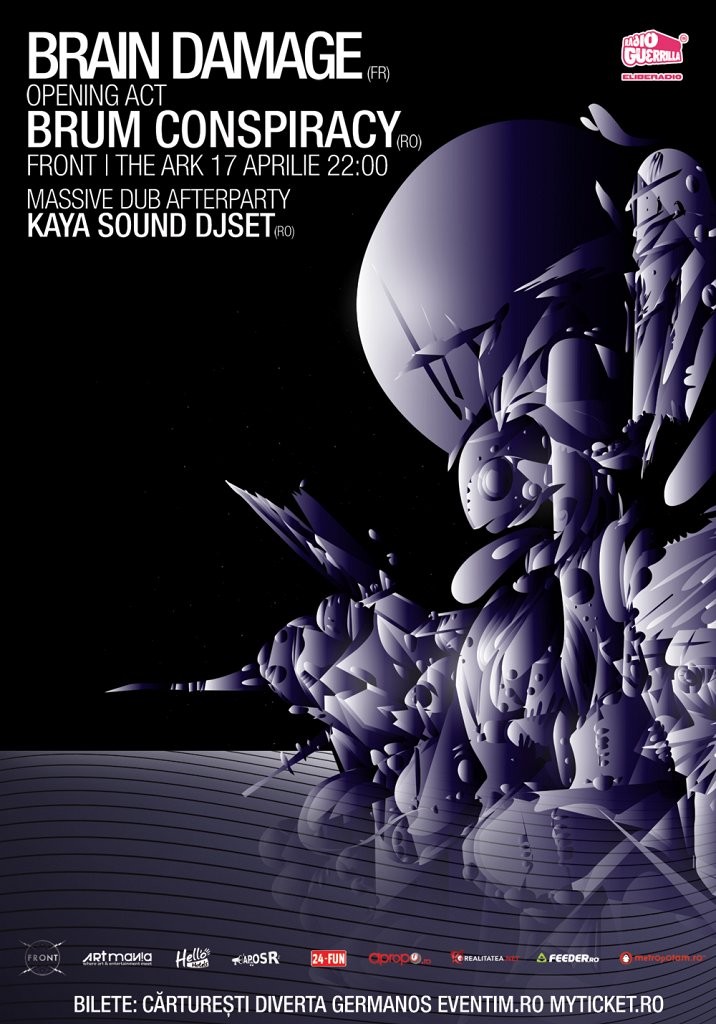 A live-act with bass and sub-bass sounds (subsonic frequencies), that’s had over 300 concerts in Europe since 1999. On stage, the duo runs against their ambient studio sound by releasing pure energy.

Brain Damage play dub, a style that evolved out of reggae in the late 60s. Dub music is based on instrumental remixes made by modifying and rearranging recordings, eliminating the vocals and amplifying the drum and bass frequencies with extra echo and reverb effects.

Profoundly sound-driven Brain Damage come with an dub-ambient outlook, a particular mix of recipes placing them in a very special niche. Alongside High Tone, Dubphonic and Kaly Live Dub, Raphael and Martin orbit the electro-dub planet, where audiences indulges in an infinite repetition of rhythm as the essence of all pleasures.

Burning Before Sunset is the Frenchmen’s latest studio album, coming out in the wake of five other lauded and applauded releases.

After the two conceptual albums The Spoken Dub Manifesto (2006) (featuring plenty of guests on the cover) and the sound mixtures of Short Cuts (2008), Brain Damage return with dark streaks and melancholy vibrations to the ambient dub of 2010. These sounds belong to a different world, one imbued with a mystical whiff of medieval alchemy, far removed from the Anglo-Jamaican era of Ashes to Ashes Dub to Dub (2004).

Burning Before Sunset is clearly running against their past musical proposals. This latest Brain Damage album is structurally based on relaxed dub rhythms that stay with you from the first chord, only later to become a mix of brute samples releasing retained but powerful energy in regular beats. This mixture of aggressive and ecstatic sound layers gives the album a delicate aura. A fundamental contribution to the Brain Damage discography, the album demonstrates the band’s ambition to never repeat itself.

In 2009, the Brum Conspiracy band has been active on underground scenes and in festivals around the country. Brum Conspiracypractices a fusion of styles – electronica and nujazz to experimental. At the moment, Brum Conspiracy is working on their first studio album, which is set to come out in the second half of the year.

This event is supported by Hello Hotels.