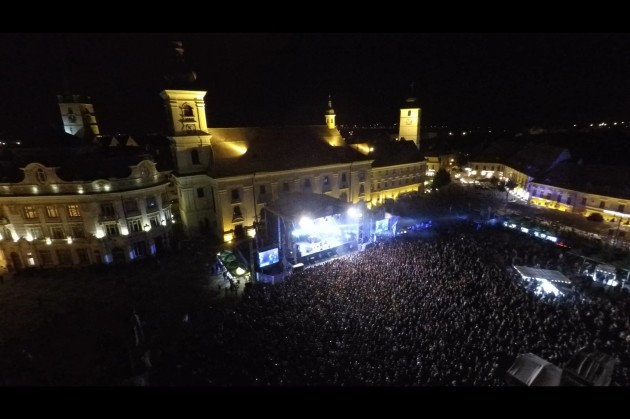 In one of the most interesting musical weekends of the summer, more than 20.000 people have chosen Sibiu, to celebrate 10 years of ARTmania Festival, along with Apocalyptica, Anathema, Clan of Xymox, Saturnus and all the other guests from this anniversary edition. The Large Square has become crowded during the Friday and Saturday’s concerts and demonstrated once again the audience dedication for rock music, reconfirming a project that turned into tradition for the city and for the festivals’ culture in Romania.

The ARTmania week was full of events, the museums were populated with rockers, as well as the clubs and the walking places from the medieval citadel of Sibiu. A particular success was the Global Battle of the Bands competition that took place on Thursday in Oldies Club, the Dracula Film Festival projections and the releases from Carturesti at the Brukenthal Palace, as well as the Gothic exhibition.

A big surprise of this anniversary edition was the attendance of a young audience, which came to Sibiu from all over the country and together with the dedicated fans and the foreign tourists, created an audience record in Sibiu during the festival. Eight super fans who kept all the tickets from the previous editions of the festival have won the anniversary pack that included a zone A ticket for the Nightwish show in December, plus meet&greet access for this year’s edition.

ARTmania Festival Sibiu plans a development for the future editions, integrating as many rock audiences and locations from the beautiful city, depending on the public’s preferences as stated in the assessment questionnaire from here: http://bit.ly/fdb-af15. Four of the respondents will win a valid ticket for the 2016 edition of ARTmania Festival and a valid zone A ticket for the Nightwish show in December, at Romexpo.

Event co financed by the Local Council of Sibiu and Sibiu City Hall.