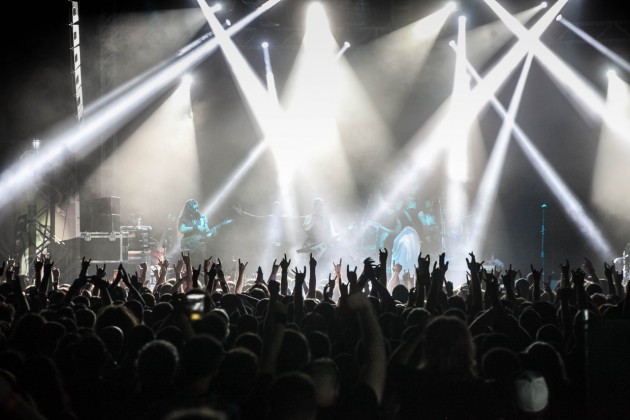 7 years ago1 year ago

Sunday, August 10, 2014, the ninth edition of ARTmania Festival closed by marking a new record for the number of events. 25 live music concerts organised in four different venues, built up for all kind of rockers: symphonic, heavy, doom and black metal, post-rock, progressive, experimental and alternative rock.
More than ten thousand fans enjoyed the three concert days during the ARTmania Festival, a bit crowded in the Vampires’ Den, lighter in the Large Square and fewer in the Brukenthal Palace and Altemberger House interior courtyards or Gong Theatre, the indoor venue used for back-up during the tricky weather days.

Alongside the most active partners of this edition, Brukenthal National Museum, ASTRA Museum and ASTRA Library, Tuborg, Jack Daniel’s, Naturlich, Carturesti, Dracula International Film Festival and a festival team with more than 180 people crew, ARTmania Festival boosted one unique experience to a very wide range of audiences targeted for every area: Vampires’ Den, Large Square, Altemberger and Brukenthal Stage.
The newest and taboo venue for this year was the Vampires’ Den, the final transformation of an industrial complex called ‘Balanta’ into one unique festival experience, ARTmania style. A big challenge, much appreciated, but nonetheless, very criticized.

With very opposed opinions, the offer was much wider than expected and our thirsty vampires hunting for culture did not have too much time to analyse. On the main stage, 14 live concerts were taking place, compatible with the lounge area where the crowd enjoyed movies, read books or played board games, learned tattoo ‘do it yourself style’ and got horror movie style make-ups, played with Happy Color and went shopping for music, clothes and accessories, all specially selected for core fans of the festival.
The highlights of this edition included some unexpected acts for the Romanian events market and unforgettable for the ARTmania Festival Sibiu attendees: Peter Hammill (VdGG) and 65daysofstatic, part of the new Post-Rock stage developed this year. The crowd responded full of enthusiasm to Therion’s and Eluveitie’s shows, meantime thousands of people listened to Alternosfera in the Large Square, the free entrance venue that promoted alternative rock this year.

Next year, the festival is celebrating its tenth edition during the first week of August with the festival’s passes covering the full events range, with extra options only for the seated events. First presale is already online on shop.artmania.ro for 75 lei (18 euros), until the end of October.    For more information please check www.artmaniafestival.ro and www.facebook.com/artmania.festival. ARTmania Festival is co-financed by the Local City Council through the Sibiu Municipality.